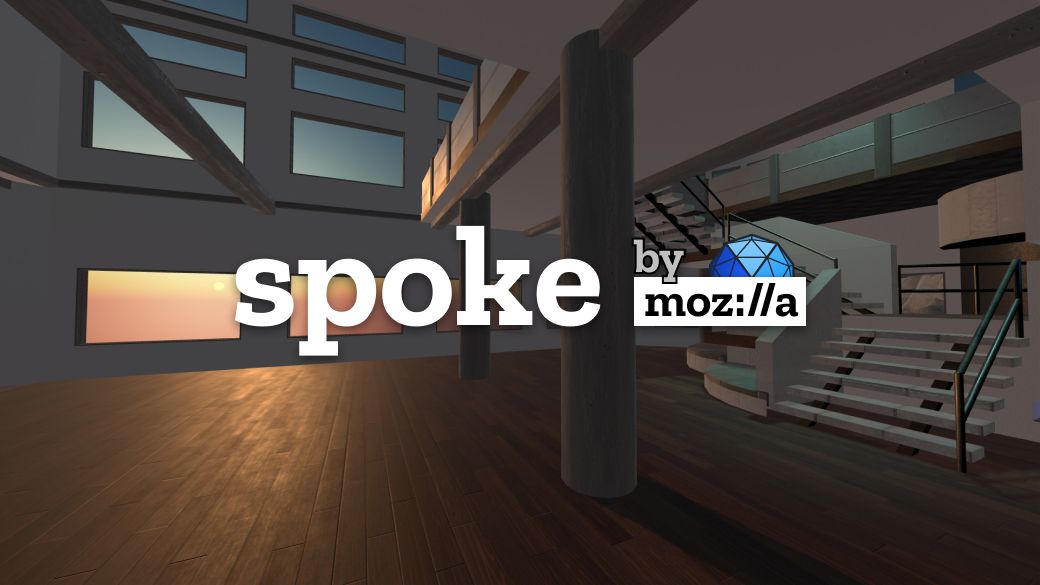 Spoke, our 3D editor for creating environments for Hubs, is celebrating its first birthday with a major update. Last October, we released the first version of Spoke, a compositing tool for mixing 2D and 3D content to create immersive spaces. Over the past year, we’ve made a lot of improvements and added new features to make building scenes for VR easier than ever. Today, we’re excited to share the latest feature that adds to the power of Spoke: the Architecture Kit!

We first talked about the components of the Architecture Kit back in March. With the Architecture Kit, creators now have an additional way to build custom content for their 3D scenes without using an external tool. Specifically, we wanted to make it easier to take existing components that have already been optimized for VR and make it easy to configure those pieces to create original models and scenes. The Architecture Kit contains over 400 different pieces that are designed to be used together to create buildings - the kit includes wall, floor, ceiling, and roof pieces, as well as windows, trim, stairs, and doors.

Because Hubs runs across mobile, desktop, and VR devices and delivered through the browser, performance is a key consideration. The different components of the Architecture Kit were created in Blender so that each piece would align together to create seamless connections. By avoiding mesh overlap, which is a common challenge when building with pieces that were made separately, z-fighting between faces becomes less of a problem. Many of the Architecture Kit pieces were made single-sided, which reduces the number of faces that need to be rendered. This is incredibly useful when creating interior or exterior pieces where one side of a wall or ceiling piece will never be visible by a user.

We wanted the Architecture Kit to be configurable beyond just the meshes. Buildings exist in a variety of contexts, so different pieces of the Kit can have one or more material slots with unique textures and materials that can be applied. This allows you to customize a wall with a window trim to have, for example, a brick wall and a wood trim. You can choose from the built-in textures of the Architecture Kit pieces directly in Spoke, or download the entire kit from GitHub.

This release, which focuses on classic architectural styles and interior building tools, is just the beginning. As part of building the architecture kit, we’ve built a Blender add-on that will allow 3D artists to create their own kits. Creators will be able to specify individual collections of pieces and set an array of different materials that can be applied to the models to provide variation for different meshes. If you’re an artist interested in contributing to Spoke and Hubs by making a kit, drop us a line at hubs@mozilla.com.

In addition to the Architecture Kit, Spoke has had some other major improvements over the course of its first year. Recent changes to object placement have made it easier when laying out scene objects, and an update last week introduced the ability to edit multiple objects at one time. We added particle systems over the summer, enabling more dynamic elements to be placed in your rooms. It’s also easier to visualize different components of your scene with a render mode toggle that allows you to swap between wireframe, normals, and shadows. The Asset Panel got a makeover, multi-select and edit was added, and we fixed a huge list of bugs when we made Spoke available as a fully hosted web app.

Looking ahead to next year, we’re planning on adding features that will give creators more control over interactivity within their scenes. While the complete design and feature set for this isn’t yet fully scoped, we’ve gotten great feedback from Spoke creators that they want to add custom behaviors, so we’re beginning to think about what it will look like to experiment with scripting or programmed behavior on elements in a scene. If you’re interested in providing feedback and following along with the planning, we encourage you to join the Hubs community Discord server, and keep an eye on the Spoke channel. You can also follow development of Spoke on GitHub.

There has never been a better time to start creating 3D content for the web. With new tools and features being added to Spoke all the time, we want your feedback in and we’d love to see what you’re building! Show off your creations and tag us on Twitter @ByHubs, or join us in the Hubs community Discord and meet other users, chat with the team, and stay up to date with the latest in Mozilla Social VR.

IntroductionTwo months ago we released ECSY, a framework-agnostic Entity Component System library you could use to build real time applications with the engine of your choice. Today we are happy to announce a