Spoke, the editor that lets you create 3D scenes for use in Hubs, is now available as a fully featured web app. When we announced the beta for Spoke back in October, it was the first step towards making the process of creating social VR spaces easier for everyone. At Mozilla, we believe in the power of the web, and it was a natural decision for us to make Spoke more widely available by making the editor entirely available online - no downloads required.

The way that we communicate is often guided by the spaces that we are in. We use our understanding of the environment to give us cues to the tone of the room, and understanding how to build environments that reflect different use cases for social collaboration is an important element of how we view the Hubs platform. With Spoke, we want everyone to have the creative control over their rooms from the ground (plane) up.

We’re constantly impressed by the content that 3D artists and designers create and we think that Spoke is the next step in making it easier for everyone to learn how to make their own 3D environments. Spoke isn’t trying to replace the wide range of 3D modeling or animation software out there, we just want to make it easier to bring all of that awesome work into one place so that more people can build with the media all of these artists have shared so generously with the world.

When it comes to building rooms for Hubs, we want everyone to feel empowered to create custom spaces regardless of whether or not they already have experience building 3D environments. Spoke aims to make it as simple as possible to find, add, and remix what’s already out there on the web under the Creative Commons license. You can bring in your own glTF models, find models on Sketchfab and Google Poly, and publish your rooms to Hubs with just a single click, which makes it easier than ever before to create shared spaces. In addition to 3D models, the Spoke editor allows you to bring in images, gifs, and videos for your spaces. Create your own themed rooms in Hubs for movie nights, academic meetups, your favorite Twitch streams: the virtual world is yours to create! 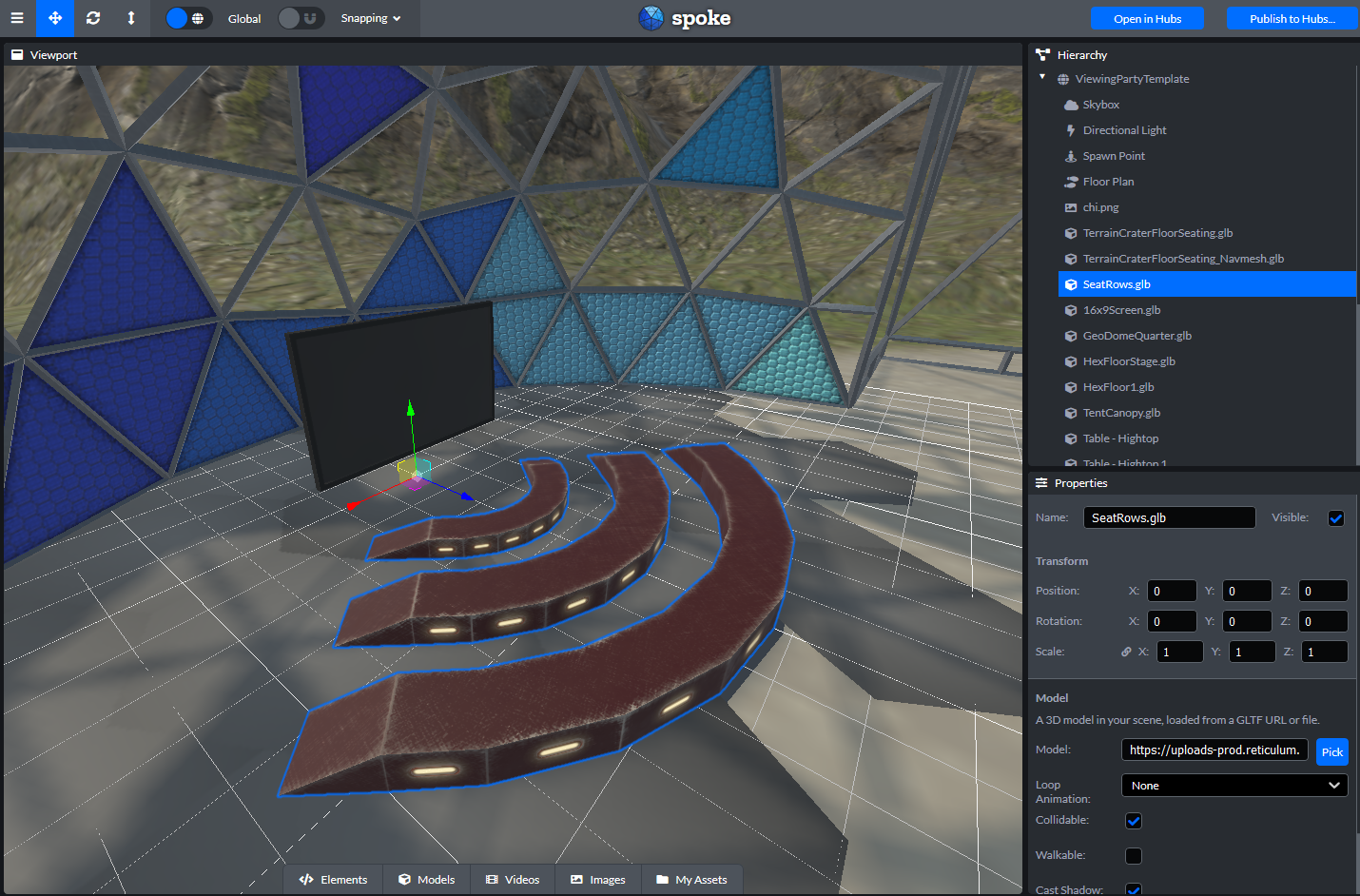 Spoke works by providing an easy-to-use interface to consolidate content into a glTF 2.0 binary (.glb) file that is read by Hubs to generate the base environment for a room. Basing Spoke on glTF, an extensible, standardized 3D file format, makes it possible to export robust scenes that could also be used in other 3D applications or programs.

Once you’ve created scenes in Spoke, you can access them from your Projects page and use them as a base for making new rooms in Hubs. You can keep your scenes private for your own use, or publish them and make them available through the media browser for anyone in Hubs to enjoy. In the future, we plan on adding functionality that allows you to remix environments that others have marked as being open to derivative works.

We want to hear your feedback as you start using Spoke to create environments - try it out at https://hubs.mozilla.com/spoke. You can view the source code and file issues on the GitHub repo, or jump into our community Discord server and say hi in the #spoke channel! If you have specific thoughts or considerations that you want to share with us, feel free to send us an email at hubs@mozilla.com to get in touch. We can’t wait to see what you make!

What I really want is an immersive future that respects individual creators and users. Platforms and applications that thoughtfully approach issues of autonomy, privacy, bias, and accessibility in a complex environment.

We are excited to announce that we’re working with Valve to bring the immersive web to SteamVR! This January, we announced [https://blog.mozilla.org/blog/2019/01/08/mozilla-announces-deal-to-bring-firefox-reality-to-htc-vive-devices/] that we