Hubs by Mozilla lets people meet in a shared 360-environment using just their browser. Hubs works on any device from head-mounted displays like HTC Vive to 2D devices like laptops and mobile phones. Using WebVR, a JavaScript API, Mozilla is making virtual interactions with avatars accessible via Firefox and other browser that people use every day.

In the course of building the first online social platform for VR and AR on the web, Mozilla wanted confirm it was building a platform that would bring people together and do so in a low-friction, safe, and scalable way. With her years of experience and seminal studies examining the successes and pitfalls of social VR systems across the ecosystem, Jessica Outlaw and Tyesha Snow of The Extended Mind, set out to generate insights about the user experience and deliver recommendations of how to improve the Hubs product.

BACKGROUND ON THE RESEARCH STUDY

In July 2018, The Extended Mind recruited five pairs of people (10 total) to come to their office in Portland, OR and demo Hubs on their own laptops, tablets, and mobile phone. We provided them with head-mounted displays (HTC Vive, Oculus Rift & Go) to use as well. 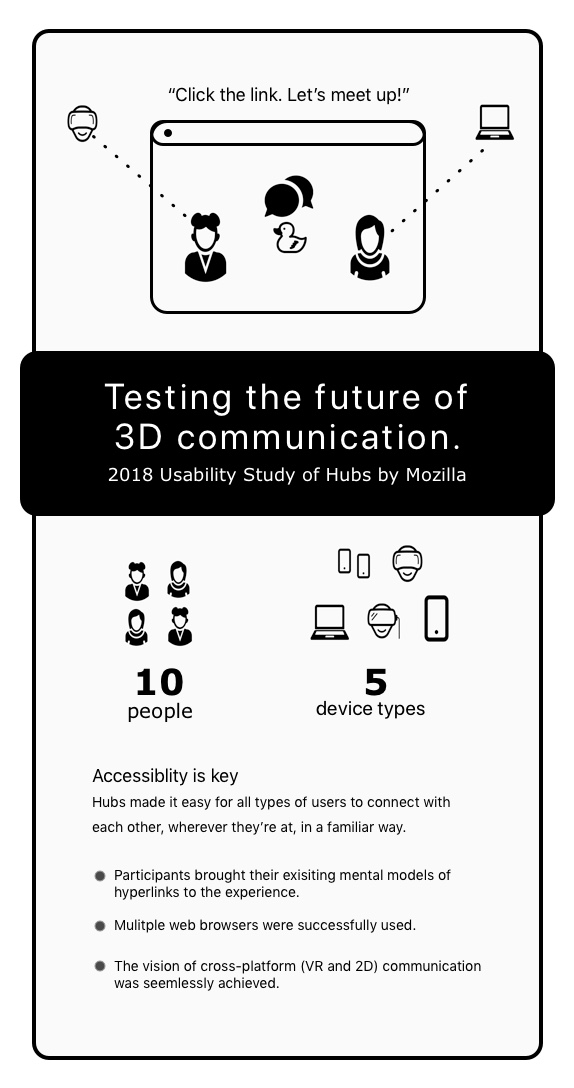 Users were a relatively tech savvy crowd and represented a range of professions from 3D artist and engineer to realtor and psychologist. Participants in the study were all successful in entering Hubs from every device and had a lot of fun exploring the virtual environment with their companion’s avatar. Some of the participants in their early twenties also made a point to say that Hubs was better than texting or a phone call because:

“This makes it easier to talk because there are visual cues.”

In this series blog posts, The Extended Mind researchers will cover some of the research findings about the first-time user experience of trying Hubs. There are some surprising findings about how the environment shaped user behavior and best practices for usability in virtual reality to share across the industry.

Today, the focus is on how the accessibility of Hubs via a browser differentiates it from other social VR apps as well as other 2D communication apps like Skype, BlueJeans, and Zoom.

The process for creating a room and inviting a friend begins at hubs.mozilla.com. Once there, participants generated a link to their private room and then copied and pasted that link into their existing communication apps, such as iMessage or e-mail.

Once their companion received the link, they followed instructions and met the person who invited them in a 360-environment. This process worked for HMDs, computers, and mobile phone. When participants were asked afterward about the ease of use of Hubs, accessibility via link was listed as a top benefit.

“It’s pretty cool that it’s as easy as copy and pasting a link.”

“I’m very accustomed to virtual spaces having their own menu and software boot up and whole process to get to, but you open a link. That’s really cool. Simple.”

Some believed that because links are already familiar to most people, they would be able to persuade their less technologically sophisticated friends & family members to meet them in Hubs.

Another benefit of using the browser is that there is already one installed on people’s electronic devices. Obstacles to app installation range from difficulty finding them in the app store, to lack of space on a hard drive. One person noted that IT must approve any app she installs on her work computer. With Hubs, she could use it right away and wouldn’t need to jump that hurdle.

Because Hubs relies on people’s existing mental models of how hyperlinks work, only requires an internet browser (meaning no app installation), and is accessible from an XR or 2D device it the most accessible communication platform today. It could possibly be the first digital experience that people have which gets them familiar with the with the concepts of 360 virtual spaces and interacting with avatars, which subsequently launches them into further exploration of virtual and extended reality.

Now that you've got a sense of the capabilities of Hubs, the next blog posts will cover more specific findings of how people used it for conversation and how the environment shaped interactions. The final post goes through the nuts and bolts of running a XR user study.

Last time we made particles which do all of the work on the CPU side. While the CPU is probably fast enough to make this work, the time it takes to transfer the

This article is part of my ongoing series of medium difficulty ThreeJS tutorials. I’ve long wanted something in between the intro “How to draw a cube” and “Let’s fill the screen