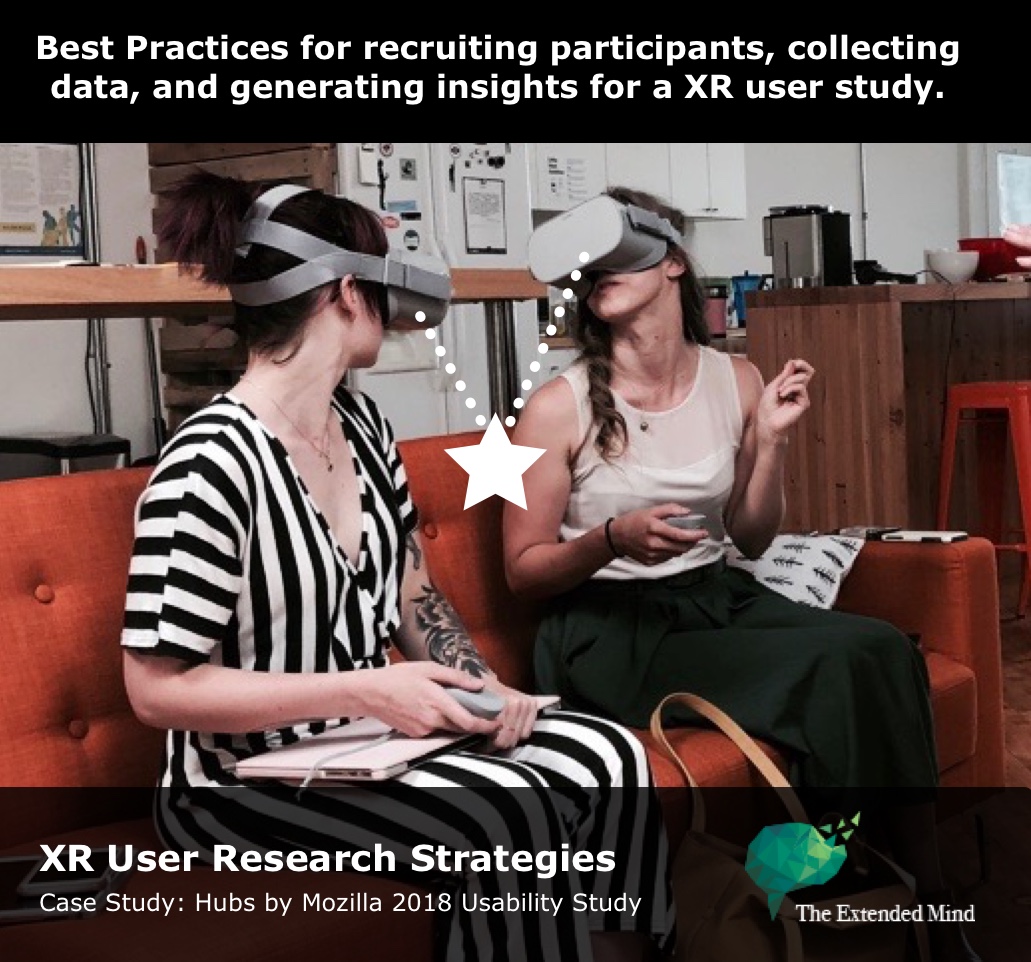 This article is part four of the series that reviews the user testing conducted on Hubs by Mozilla, a social XR platform. Previous posts in this series have covered insights related to accessibility, user experience, and environmental design. The objective of this final post is to give an overview of how the Extended Mind and Mozilla collaborated to execute this study and make recommendations for best practices in user research on cross platform (2D and XR) devices.

PARTICIPANTS WILL MAKE OR BREAK THE STUDY

Research outcomes are driven by participant quality so plan to spend a lot of time up front recruiting. If you don’t already have defined target users, pick a user profile and recruit against that. In this study, Jessica Outlaw and Tyesha Snow of The Extended Mind sought people who were tech savvy enough to use social media and communicate on smartphones daily, but did not require that they owned head-mounted displays (HMDs) at home.

The researchers’ approach was to recruit for the future user of Hubs by Mozilla, not the current user who might be an early adopter. Across the ten participants in the study, a broad range of professions were represented (3D artist, engineer, realtor, psychologist, and more), which in this case was ideal because Hubs exists as a standalone product. However, if Hubs were in an earlier stage where only concepts or wireframes could be shown to users, it would have been better to include people with VR expertise because they could more easily imagine the potential it.

In qualitative research, substantial insights can be generated from between six and twelve users. Beyond twelve users, there tends to be redundancy in the feedback, which doesn’t justify the extra costs of recruiting and interviewing those folks. In general, there is more value in running two smaller studies of six people at different iterations of product development, rather than just one study with a larger sample size. In this study, there were ten participants, who provided both diversity of viewpoints and enough consistency that strong themes emerged.

The researchers wanted to test Hubs’ multi-user function by recruiting people to come in pairs. Having friends and romantic partners participate in the study allowed The Extended Mind to observe authentic interactions between people. While many of them were new to XR and some were really impressed by the immersive nature of the VR headset, they were grounded in a real experience of talking with a close companion

For testing a social XR product, consider having people come in with someone they already know. Beyond increasing user comfort, there is another advantage in that it was more efficient for the researchers. They completed research with ten people in a single day, which is a lot in user testing.

It’s important to make users feel welcome when they arrive. Offer them water or snacks. Pay them an honorarium for their time. Give them payment before the interviews begin so that they know their payment is not conditional on them saying nice things about your product. In fact, give them explicit permission to say negative things about the product. Participants tend to want to please researchers so let them know you want their honest feedback. Let them know up front that they can end the study, especially if they become uncomfortable or motion sick.

The Extended Mind asked people to sign a consent form for audio, video, and screen recording. All forms should give people the choice to opt out from recordings.

In the Hubs by Mozilla study, the format of each interview session was:

Pairs were together for the opening and closing interviews, but separated into different conference rooms for actual product usage. Jessica and Tyesha each stayed with a participant at all times to observe their behaviors in Hubs and then aggregated their notes afterward.

One point that was essential was to give people some experience with the Oculus Go before actually showing them Hubs. This was part of the welcome and pre-Hubs interview in this study. Due to the nascent stage of VR, participants need extra time to learn about navigating the menus and controllers. Before people to arrive in any XR experience, people are going to need to have some familiarity with the device. As the prevalence of HMDs increases, taking time to give people an orientation will become less and less necessary. In the meantime, setting a baseline is an important piece for users about where your experiences exist in the context of the device’s ecosystem.

Once all the interviews have been completed, it’s time to start analyzing it the data. It is important to come up with a narrative to describe the user experience. In this example, Hubs was found to be accessible, fun, good for close conversations, and participants’ experiences were influenced by the environmental design. Those themes emerged early on and were supported by multiple data points across participants.

Using people’s actual words is more impactful than paraphrasing them or just reporting your own observations due to the emotional impact of a first-person experience. For example,

“The duck makes a delightful sound.”

There are instances where people make similar statements but each used their own words, which helps bolster the overall point. For example, three different participants said they thought Hubs improved communication with their companion, but each had a different way of conveying it:

[Hubs is] “better than a phone call.”
“Texting doesn’t capture our full [expression]”
“This makes it easier to talk because there are visual cues.”

Attempt to weave together multiple quotes to support each of the themes from the research.

User testing will uncover new uses of your product and people will likely spontaneously brainstorm new features they want and more. Expect that users will surprise you with their feedback. You may have planned to test and iterate on the UI of a particular page, but learn in the research that the page isn’t desirable and should be removed entirely.

In this study, Mozilla partnered with The Extended Mind to conduct the research and deliver recommendations on how to improve the Hubs product. For the day of testing, two Hubs developers observed all research sessions and had the opportunity to ask the participants questions. Having Mozilla team members onsite during testing let everyone sync up between test sessions and led to important revisions about how to re-phrase questions, which devices test on, and more.

Due to Jessica and Tyesha being outside of the core Hubs team, they were closer to the user perspective and could take a more naturalistic approach to learning about the product. Their goals were to represent the user perspective across the entire project and provide strategic insights that the development team could apply.

This post has provided some background on the Hubs by Mozilla user research study and given recommendations on best practices for people who are interested in conducting their own XR research. Get in touch with contact@extendedmind.io with research questions and, also, try Hubs with a friend. You can access it via https://hubs.mozilla.com/.

This is the final article in a series that reviews user testing conducted on Mozilla’s social XR platform, Hubs. Mozilla partnered with Jessica Outlaw and Tyesha Snow of The Extended Mind to validate that Hubs was accessible, safe, and scalable. The goal of the research was to generate insights about the user experience and deliver recommendations of how to improve the Hubs product. Links to the previous posts are below.

Virtual and Augmented Reality (VR and AR) — known together as Mixed Reality (MR) — introduce a new dimension of physicality to current web security and privacy concerns. Problems that are already difficult on the

WebGL, and therefore ThreeJS supports vertex shaders. And they are awesome. Why? Because they can do things on the GPU that would be costly or impossible on the CPU. Today we will make