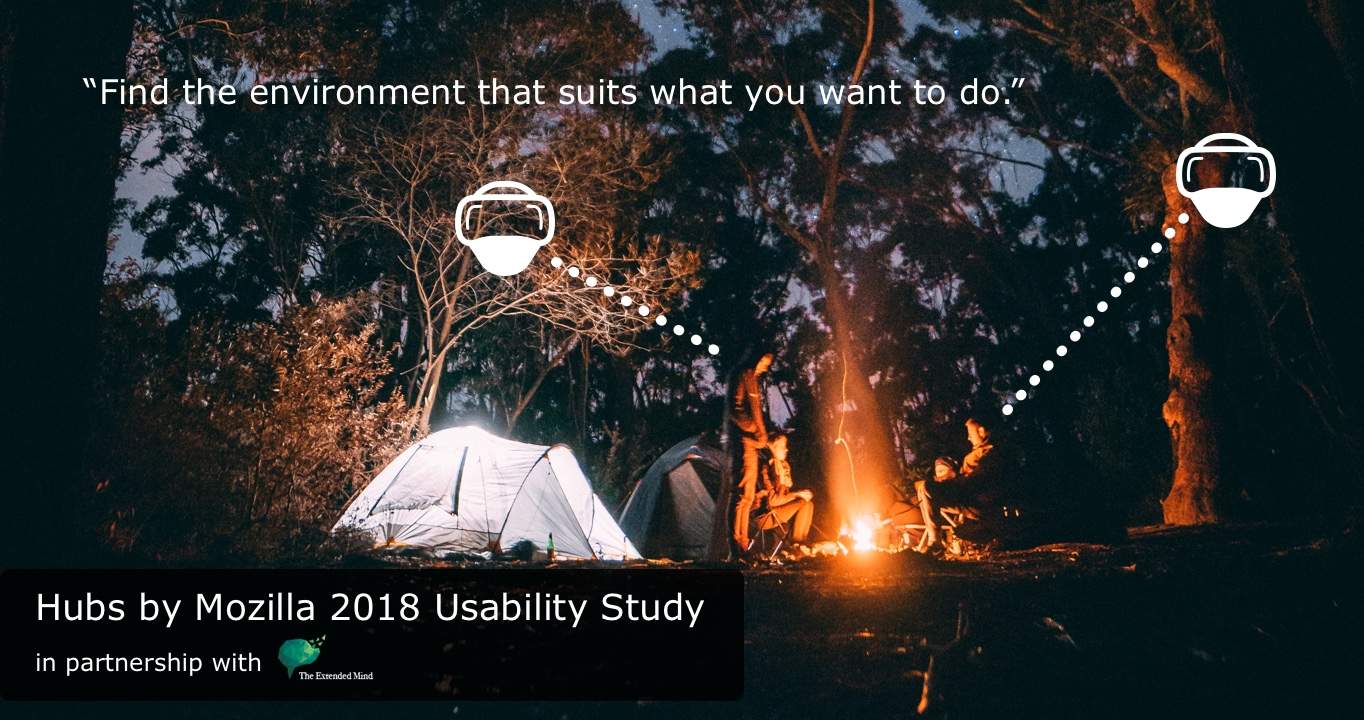 In previous research, The Extended Mind has documented how a 3D space automatically signals to people the rules of behavior. One of the key findings of that research is that when there is synchrony in the design of a space, it helps communicate behavioral norms to visitors. That means that when there is complementarity among content, affordances, and avatars, it helps people learn how to act. One example would be creating a gym environment (content), with weights (affordances), but only letting avatars dress in tuxedos and evening gowns. The contraction of people’s appearances could demotivate weight-lifting (the desired behavior).

This article shares learnings from the Hubs by Mozilla user research on how the different locations that they visited impacted participant’s behavior. Briefly, the researchers observed five pairs of participants in multiple 3D environments and watched as they navigated new ways of interacting with one another. In this particular study, participants visited a medieval fantasy world, a meeting room, an atrium, and a rooftop bunker.

To read more about the details and set up of the user study, read the intro blog post here.

The key environmental design insights are:

The rest of the article will provide additional information on each of the insights.

Anticipate that people will want to explore upon arrival

Users immediately began exploring the space and quickly taught themselves to move. This might have been because people were new to Hubs by Mozilla and Social VR more generally. The general takeaway is that XR creators should give people something to discover once they arrive. Finding something will will be satisfying to the user. Platforms could also embrace novelty and give people something new to discover every time they visit. E.g., in Hubs, there is a rubber duck. Perhaps the placement of the duck could be randomly generated so people would have to look for it every time they arrive.

One thing to consider from a technical perspective was that the participants in this study didn’t grasp that by moving away from their companion it would be harder to hear that person. They made comments to the researchers and to each other about the spatialized audio feature:

While spatialized audio has multiple benefits and adds a dimension of presence to immersive worlds, in this case, people’s lack of understanding meant that they sometimes had sound issues. When this was combined with people immediately exploring the space when they arrived earlier than their companion, it was sometimes challenging for people to connect with one another. This leads to the second insight about size of the space.

When people arrived in the smaller spaces, it was easier for them to find their companion and they were less likely to get lost. There’s one particular world that was tested called a Medieval Fantasy book and it was inviting with warm colors, but it was large and people wandered off. That type of exploration sometimes got in the way of people enjoying conversations:

“I want to look at her robot face, but it’s hard because she keeps moving.”

This is another opportunity to consider use cases for for any Social VR environment. If the use case is conversation, smaller rooms lead to more intimate talks. Participants who were new to VR were able to access this insight when describing their experience.

"The size of the space alludes to…[the] type of conversation. Being out in this bigger space feels more public, but when we were in the office, it feels more intimate."

This quote illustrates how size signaled privacy to users. It is also coherent with past research from The Extended Mind on how to configure a space to match users’ expectations.

…when you go to a large city, the avenues are really wide which means a lot of traffic and people. vs. small streets means more residential, less traffic, more privacy. All of those rules still apply [to XR].

The lesson for all creators is that the more clear that they are on the use case of a space, the easier it should be to build it. In fact, participants were excited about the prospect of identifying or customizing their own spaces for a diverse set of activities or for meeting certain people:

“Find the best environment that suits what you want to do...

There is a final insight on how the environment shapes user behavior and it is about objects change people’s perceptions, including around big concepts like privacy.

Objects shaped people’s expectations of what the space was for

There were two particular Hubs objects that users responded to in interesting ways. The first is the rubber duck and the second is a door. What’s interesting to note is that in both cases, participants are interpreting these objects on their own and no one is guiding them. 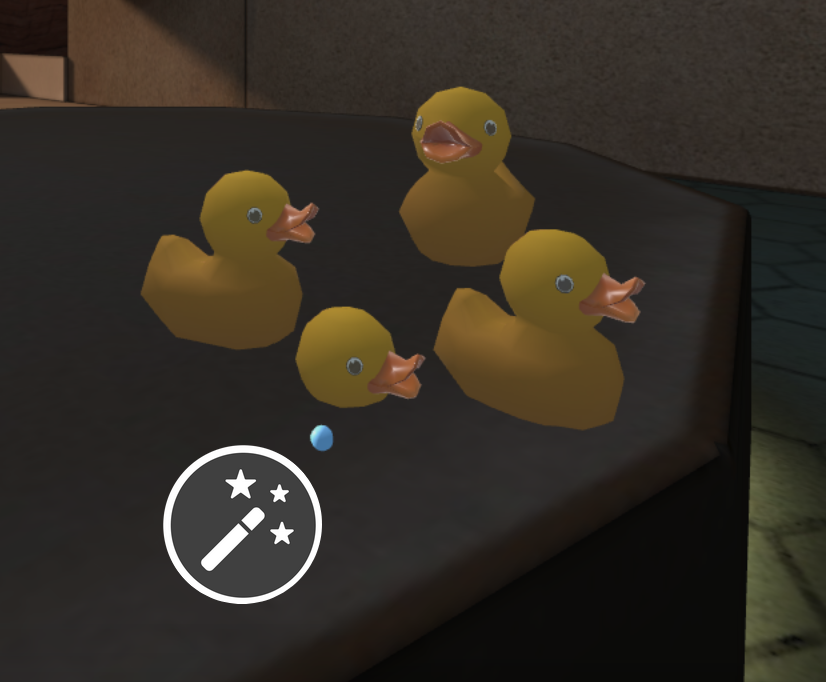 The rubber duck is unique to Hubs and was something that users quickly became attached to. When a participant clicked on the duck, it quacked and replicated itself, which motivated the users to click over and over again. It was a playful fidget-y type object, which helped users understand that it was fine to just sit and laugh with their companion and that they didn’t have to “do something” while they visited Hubs.

However, there were other objects that led users to make incorrect assumptions about privacy of Hubs. The presence of a door led a user to say:

“I thought opening one of those doors would lead me to a more public area.”

In reality, the door was not functional. Hubs’ locations are entirely private places accessible only via a unique URL.

What’s relevant to all creators is that their environmental design is open to interpretation by visitors. And even if creators make attempts to scrub out objects and environments sparse, that will just lead users to make different assumptions about what it is for. One set of participant decided that one of the more basic Hubs spaces reminded them of an interrogation room and they constructed an elaborate story for themselves that revolved around it.

Environmental cues can shape user expectations and behaviors when they enter an immersive space. In this test with Hubs by Mozilla, large locations led people to roam and small places focused people’s attention on each other. The contents of the room also influence the topics of conversations and how private they believed their discussions might be.

All of this indicates that XR creators should consider the subtle messages that their environments are sending to users. There’s value in user testing with multiple participants who come from different backgrounds to understand how their interpretations vary (or don’t) from the intentions of the creator. Testing doesn’t have to be a huge undertaking requiring massive development hours in response. It may uncover small things that could be revised rapidly – such as small tweaks to lighting and sound could impact people’s experience of a space. For the most part, people don’t feel like dim lighting is inviting and a test could uncover that early in the process and developers could amp up the brightness before a product with an immersive environment actually launches.

The final article in this blog series is going to focus on giving people the details of how this Hubs by Mozilla research study was executed and make recommendations for best practices in conducting usability research on cross platform (2D and VR) devices.

This article is part three of the series that reviews the user testing conducted on Mozilla’s social XR platform, Hubs. Mozilla partnered with Jessica Outlaw and Tyesha Snow of The Extended Mind to validate that Hubs was accessible, safe, and scalable. The goal of the research was to generate insights about the user experience and deliver recommendations of how to improve the Hubs product.

So far everything we’ve built with particles have been classic GPU particles, meaning we used points and the entire lifetime of a particle is calculated from time and constants available when the

I need to build a sort of vacuum cleaner effect for a little game I’m working on. This means the particles should be distributed randomly in an area then come back to