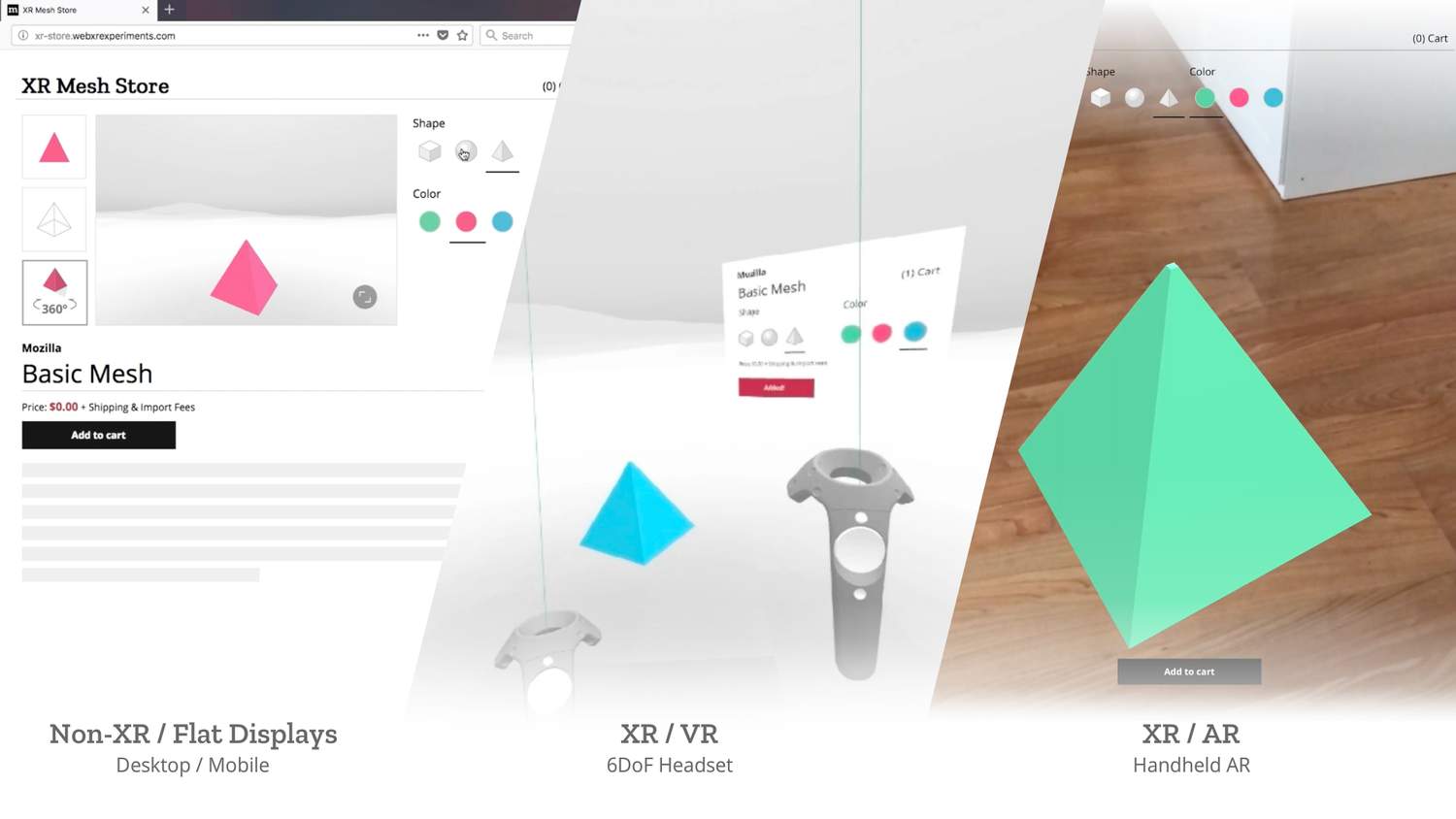 Imagine you wanted to have your store’s web page work in 2D, and also take advantage of the full range of AR and VR devices. WebXR will provide the foundation you need to create pages that work everywhere, and let you focus on compelling User Experiences on each of the devices.

In a recent blog post, we touched on one aspect of progressive WebXR, showcasing a version of A-Painter that was adapted to handheld AR and immersive VR. In this post, we will dive a bit deeper into the idea of progressive WebXR apps that are accessible across a much wider range of XR-supported devices.

The WebXR Device API expands on the WebVR API to include a broader range of mixed reality devices (i.e., AR/VR, immersive/handheld). By supporting all mixed reality devices in one API, the Immersive Web community hopes to make it easier for web apps to respond to the capabilities of a user’s chosen device, and present an appropriate UI for AR, VR, or traditional 2D displays.

At Mozilla, this move aligns with experiments we started last fall, when we created a draft WebXR API proposal, a WebXR polyfill based on it, and published our WebXR Viewer experimental web browser application to the iOS App Store. Publishing the app for iOS allowed us (and others) to experiment with WebXR on iOS, and is one of the target platforms for the XR Store demo that is the focus of this article. This demo shows how future sites can support the WebXR API across many different devices.

Before introducing the example store we've create, I’ll give an overview of the spectrum of devices that might need to be supported by a UX strategy to design this kind of WebXR-compatible site.

The spectrum of WebXR displays/realities 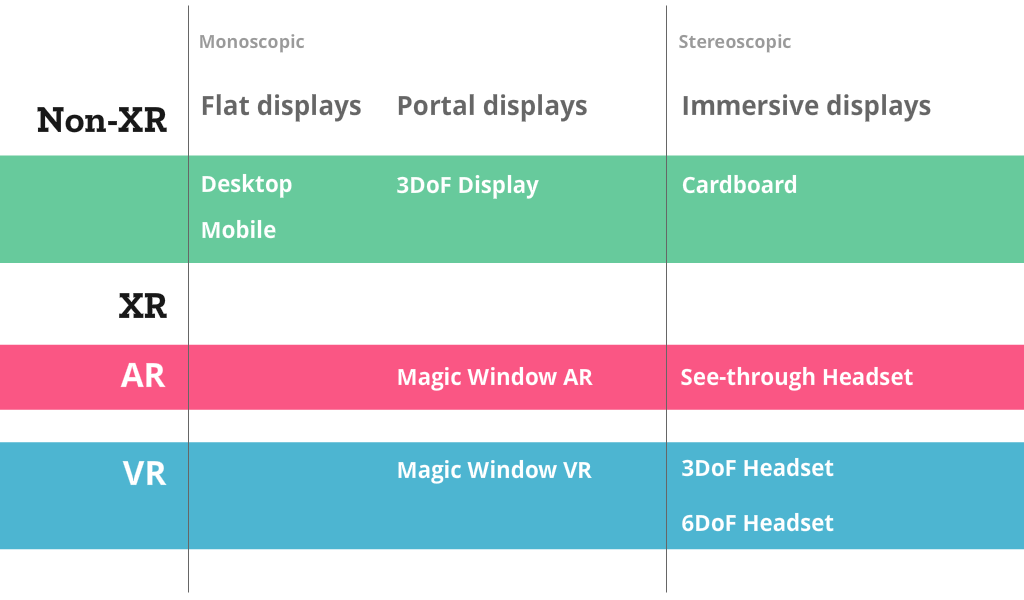 Broadly speaking, there are three categories of displays that need to be supported by a responsive WebXR application:

Current flat displays, such as desktop monitors, phones and tablets, may not have access to VR/AR capabilities via WebXR, although some will be able to simulate WebXR using a WebXR polyfill. Such desktop and mobile displays will remain the most common ways to consume web content for the forseeable future.

Mobile devices with 3DoF orientation sensors (that use accelerometers, gyroscopes, and magnetometers to give 3 Degrees of Freedom for the device pose) can simulate monoscopic 3D VR (and AR, if they use getUserMedia to access the video camera on the device), by leveraging the deviceorientation or Orientation Sensor APIs to access the device orientation.

Apps written for "Cardboard" display holders for these mobile devices (i.e., cases that use the phone's screen as their display, such as a Google Cardboard) use the same 3DoF sensors, but render stereoscopic VR on the phone display.

XR displays come in two sorts: AR and VR. The most common XR displays right now are Handheld or "Magic Window" AR, made possible by Apple’s ARKit for iOS (used by our WebXR Viewer) or Google’s ARCore for Android (used by the WebAROnARCore experimental browser). These give the user the illusion that the phone is a portal, or magic window, into an AR scene surrounding the user.

While currently less common, optically see-through headsets such as Microsoft’s Hololens provide an immersive 3D experience where virtual content can more convincingly surround the user. Other displays are in development or limited release, such as those from Magic Leap and Meta. We’ve shown the Meta 2 display working with WebVR in Firefox, and hope most upcoming AR displays will support WebXR eventually.

Thanks to WebVR, web-based VR is possible now on a range of immersive VR displays. The most common VR displays are 3DoF Headsets, such as Google Daydream or Samsung Gear VR. 6DoF Headsets (that provide position and orientation, giving 6 degrees of freedom), such as the HTC Vive, Oculus Rift, and Windows Mixed Reality-compatible headsets, can deliver fully immersive VR experiences where the user can move around.

The second category of VR displays are what we call Magic Window VR. These displays use flat 2D displays, but leverage 3D position and orientation tracking provided by the WebXR API to determine the pose of the camera and simulate a 3D scene around the user. Similar to Magic Window AR, these are possible now by leveraging the tracking capabilities of ARKit and ARCore, but not showing video of the world around the user.

In the table below we have listed the common OS, browsers, and devices for each category. 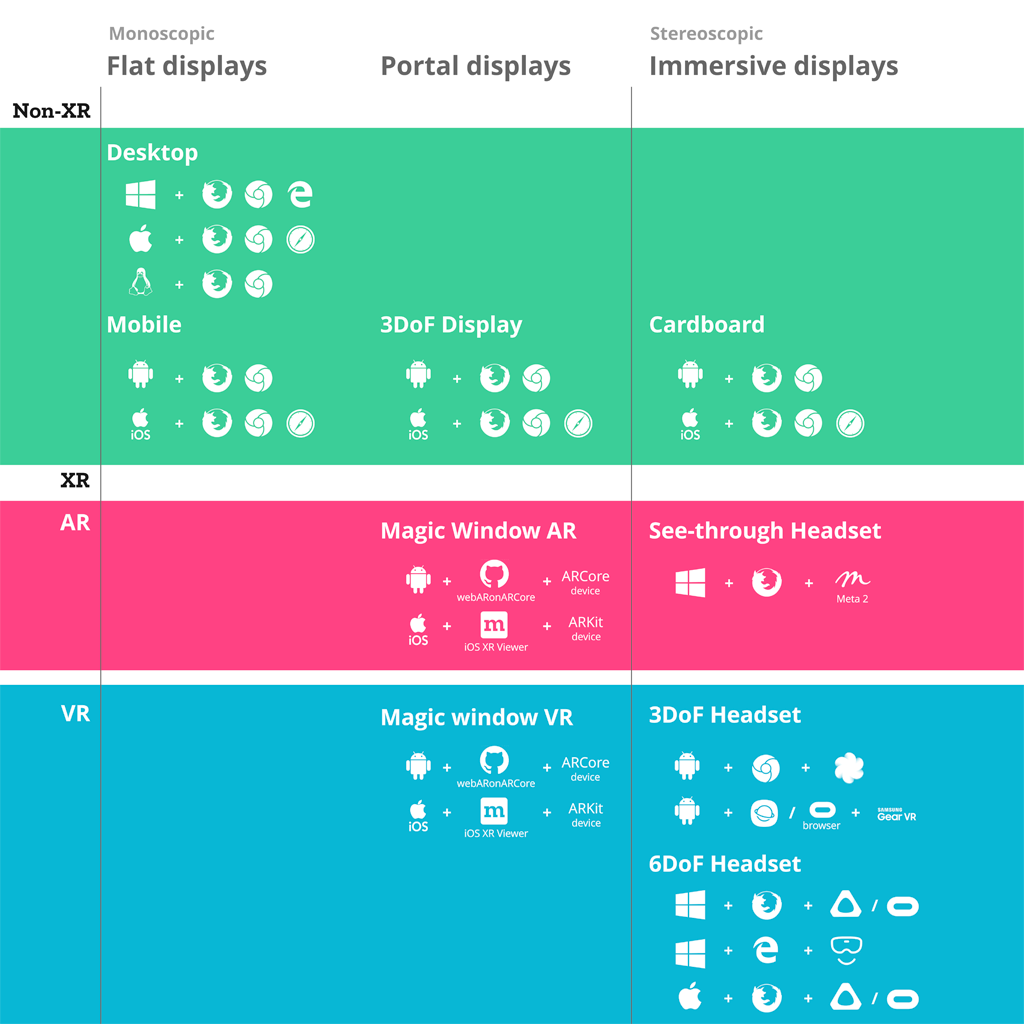 Creating responsive web apps that adapt to the full range of non-XR and WebXR devices will allow web developers to reach the widest audience. The challenge is to create a site that provides an appropriate interface for each of the modalities, rather than designing for one modality and simulating it on the others. To demonstrate this, we created a realistic XR Store demo, implementing a common scenario for WebXR: a product sheet on a simulated e-commerce site that allows the visitor to see a product in 3D on a traditional display, in a virtual scene in VR, or in the world around them in AR.

We selected a representative set of current XR modes to let us experiment with a wide range of user experiences: Desktop / Mobile on Flat displays, AR Handheld on Portal Displays), and 3DoF / 6DoF Headsets on Immersive Displays.

The image below shows some initial design sketches of the interfaces and interactions for the XR Store application, focusing on the different user experiences for each platform. 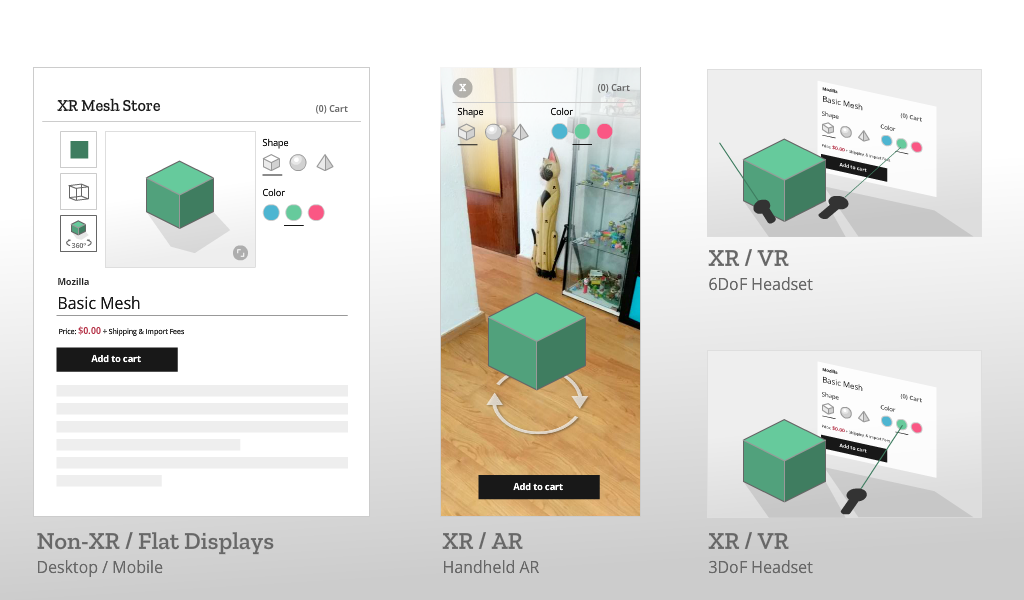 Selecting the Best User Interface for Each Platform

In the XR Store demo we used four types of User Interfaces (UIs), borrowing from terminology commonly used in 3D UIs (including in video games):

We also considered using these two types as well:

For Non-XR / Flat Displays we are using exclusively Page UI controls, and a Non-Diegetic element for a button to enter Fullscreen mode (a common pattern in UIs in 2D applications). We opted not to mix the page elements with diegetic controls embedded in the 3D scene, as page-based metaphors are what current web users would expect to find on a product detail page.

For XR / AR, we start with a very similar interface to the one used on Flat Displays (page controls, a diegetic button to switch to AR mode), but once in AR use Non-Diegetic UI elements over the 3D scene to make it easier to change the product properties. We could also have used a Direct Manipulation UI to scale, rotate, or move the product in the projected reality (but decided not to, in this example, for simplicity).

For XR / VR we are using Diegetic UI for interaction controllers and a Spatial UI to give the user a representation of the selectable part of the product sheet. We could have used an Anchored UI to make it easier to find this panel, as we did in the VR painting interface for A-Painter. We ended up using the same UI for 3DoF and 6DoF VR, but could have changed the UI slightly for these two different cases, such as (for example) moving the 2D panel to stay behind-and-to-the-right of the object as a 6DoF user walks around. Another option would have been to have the 2D panel slide into view whenever it goes offscreen, a common metaphor used in applications for Microsoft’s HoloLens. Each of these choices has its pros and cons; the important part is enabling designers to explore different options and use the one that is more appropriate for their particular use case.

The source code for the XR Store demo currently uses a custom version of A-Frame combined with our aframe-xr WebXR binding for A-Frame. The aframe-xr bindings are based on our experimental webxr-polyfill and our three-xr WebXR bindings for three.js.

To try it out, visit XR Store on the appropriate device and browser. To try the 3DoF VR mode, you can use Google Chrome on an Android phone supporting Daydream, or the Samsung Internet/Oculus Browser on a phone supporting Gear VR. The demo supports any 6DoF VR device that works with Firefox, such as the HTC Vive or Oculus Rift, or Windows Mixed Reality headsets with Edge.

This demo is an exploration of how the web could be accessed in the near future, where people will be able to connect from multiple devices with very diverse capabilities. Beyond the platforms implement here, we will soon face an explosion of AR see-through head-worn displays that will offer a new ways of interact with our content. Such displays will likely support voice commands and body gestures as input, rather than 3D controllers like their immersive VR counterparts. One day, people may have multiple devices they use simultaneously: instead of visiting a web page on their phone and then doing AR or VR on that phone, they may visit on their phone and then send the page to their AR or VR headset, and expect the two devices to coordinate with each other.

One interface we intentionally didn't explore here is the idea of presenting the full 2D web page in 3D (AR or VR) and having the product "pop" out of the 2D page into the 3D world. As web browsers evolve to displaying full HTML pages in 3D, such approaches might be possible, and desirable in some cases. One might imagine extensions to HTML that mark parts of the page as "3D capable" and provide 3D models that can be rendered instead of 2D content.

Regardless of how the technology evolves, designers should continue to focus on offering visitors the best options for each modality, as they do with 2D pages, rather than offering all the possible UI options in every possible modality. Designers should still focus on their users’ experience, and offering the best support for each of the possible displays that the users might have, building on the Progressive-Enhancement design strategy popular on todays 2D web.

Today, the Web is a 2D platform accessible by all, and with the WebXR API, we will soon be using it to connect with one another in the VR and AR. As we move toward this future, supporting the widest range of devices will continue to be a critical aspect of designing experiences for the web.

In the spirit of This week in Firefox [https://blog.nightly.mozilla.org/]/Rust [https://this-week-in-rust.org/]/Servo [https://blog.servo.org/], we’ve decided to start sharing weekly updates on the progress

Today we are proud to announce Firefox Reality, a new web browser designed from the ground up for stand-alone virtual and augmented reality headsets. We took our existing Firefox web technology and enhanced