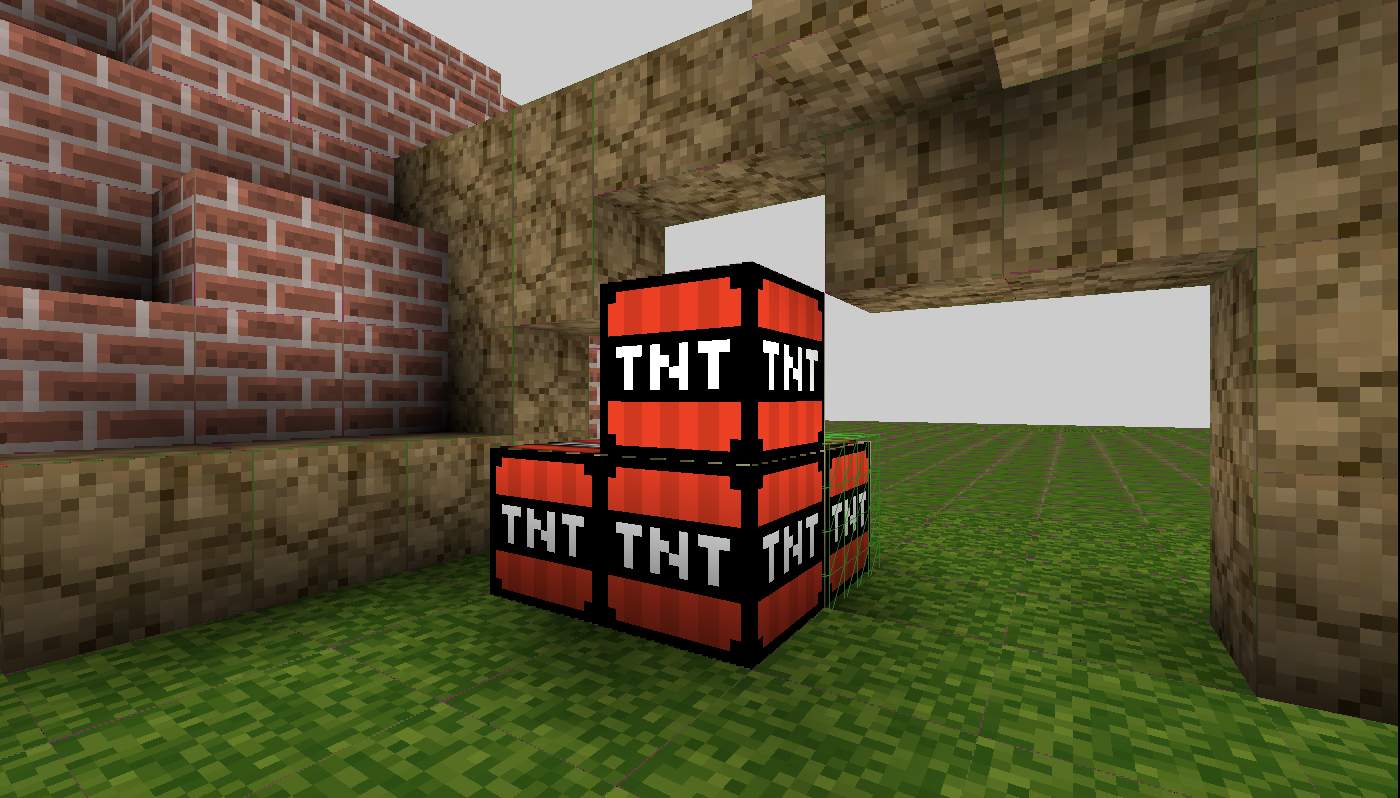 A couple of weeks ago I relaunched VoxelJS with modern ThreeJS and modules support. Today I'm going to talk a little bit about how VoxelJS works internally, specifically how voxels are represented and drawn. This is the key magic part of a voxel engine and I owe a tremendous debt to Max Ogden, James Halliday and Mikola Lysenko

Voxels are represented by numbers in a large three dimensional array. Each number says what type of block goes in that block slot, with 0 representing empty. The challenge is how to represent a potentially infinite set of voxels without slowing the computer to a crawl. The only way to do this is to load just a portion of the world at a time.

We could do this by generating a large structure, say 512 x 512 x 512 blocks, then setting entries in the array whenever the player creates or destroys a block.

This process would work, but we have a problem. A grid of numbers is great for representing voxels, but we don’t have a way to draw them. ThreeJS (and by extension, WebGL) only thinks in terms of polygons. So we need a process to turn the voxel grid in to a polygon mesh. This process is called meshing.

The simple way to do meshing would be to create a cube object for every voxel in the original data. This would work but it would be incredibly slow. Plus most cubes are inside terrain and would never be seen, but they would still take up memory in the GPU and have to be culled from the view. Clearly we need to find a way to create more efficient meshes.

Even if we have a better way to do the meshing we still have another problem. When the player creates or destroys a block we need to update the data. Updating a single entry in an array is easy, but then we have to recreate the entire polygon mesh. That’s going to be incredibly slow if we must rebuild the entire mesh of the entire world every time the player creates a block, which will happen a lot in a game like Minecraft. VoxelJS has a solution to both of our problems. : chunks.

The world is divided into large cubes called chunks, each composed of a uniform set of blocks. By default each chunk is 16x16x16 blocks, though you can adjust this depending on your need. Each chunk is represented by an array of block types, just as before, and when any block in the chunk changes the entire chunk transformed into a new polygon mesh and sent to the GPU. Because the chunk is so much smaller than before this shouldn’t take very long. In practice it can be done in less than a few milliseconds on a laptop. Only the single chunk which changed needs to be updated, the rest can stay in GPU memory and just be redrawn every frame (which is something modern GPUs excel at).

As the player moves around the world VoxelJS maintains a list of chunks that are near by. This is defined as chunks within a certain radius of the player (also configurable). As chunks go out of the nearby list they are deleted and new chunks are created. Thus at any given time only a small number of chunks are in memory.

This chunking system works pretty well with the naive algorithm that creates a cube for every voxel, but it still ends up using a tremendous amount of GPU memory and can be slow to draw, especially on mobile GPUs. We can do better.

The first optimization is to only create cube geometry for voxels that are actually visible from the outside. All internal voxels can be culled. In VoxelJS this is implemented by the CullingMesher in the main src directory.

Culling works a lot better than naive meshing, but we could still do better. If there is a 10 x 10 wall it would be represented by 100 cubes (then multiplied another 12 when turned into triangles); yet in theory the wall could be drawn with a single box object.

To handle this case VoxelJS has another algorithm called the GreedyMesher. This produces vastly more efficient meshes and takes only slightly longer to compute than the culling mesh.

There is a downside to greedy meshing, however. Texture mapping is very easy on cubes, especially when using a texture atlas. The same with ambient occlusion. However, for arbitrary sized rectangular shapes the texturing and lighting calculations become a lot more complicated.

Once we have the voxels turned into geometry we can upload it to the GPU, but this won’t let us draw different block types differently. We could do this with vertex colors, but for a real Minecraft like environment we need textures. A mesh can only be drawn with a single texture in WebGL. (Actually it is possible to use multiple textures per polygon using Texture Arrays but those are only supported with WebGL 2). In order to render multiple textures on a single mesh, which is required for chunks that have more than one block type, we must combine the different images into a single texture called a texture atlas.

To use a texture atlas we need to tell the GPU which part of the atlas to draw for each triangle in the mesh. VoxelJS does this by adding a subrects attribute to the buffer that holds the vertex data. Then the fragment shader can use this data to calculate the correct UV values for the required sub-texture.

VoxelJS can also handle animated textures for special blocks like water and lava. This is done by uploading all of the animation frames next to each other in the texture atlas. A frameCount attribute is passed to the shader along with a time uniform. The shader uses this information to offset the texture coordinates to get the particular frame that should be drawn.

This animation system works pretty well but it does require all animations to have the same speed. To fix this I think we would need to have a speed attribute passed to the shader.

Currently VoxelJS supports both culled and greedy meshing. You can switch between them at runtime by swapping out the mesher and regenerating all chunks. Ambient occlusion lighting works wonderfully with culled meshing but does not currently work correctly with the greedy algorithm. Additionally the texturing code for greedy meshing is far more complicated and less efficient than it should be. All of these are open issues to be fixed.

I hope this gives you insight into how VoxelJS Next works and how you can customize it to your needs.

If you'd like to get involved I've created a list of issues that are great for people new to the project.

We are excited to announce that we’re working with Valve to bring the immersive web to SteamVR! This January, we announced [https://blog.mozilla.org/blog/2019/01/08/mozilla-announces-deal-to-bring-firefox-reality-to-htc-vive-devices/] that we

We're excited to announce an official Hubs integration with Discord, a platform that provides text and voice chat for communities. If you are interested in participating in the beta, learn more at: hubs.mozilla.com/discord